Home Blog Voice over services: what’s so special about the voice overs in The Handmaid’s Tale?

When discussing voice over services at the moment you can’t help but make reference to the recent TV adaptation of The Handmaid’s Tale. Originally a novel written by Canadian writer Margaret Atwood – it has attracted all kinds of praise from the industry. Bosting scores of 100% on Rotten Tomatoes and 92% on Metacritic, it’s fair to say there isn’t much criticism of the Hulu series, which currently airs on Channel 4 in the UK.

The series garners accolades across the board: from Bruce Millar’s script to the discomforting direction and cinematography set out by Reed Morano in the first three episodes. Then, of course, you have the actors including Elisabeth Moss leading the cast in this dystopian vision of the future.

It’s not only her on-screen acting that’s caught people’s attention either, but her voice over services work that takes viewers into the working mind of her darkened character.

Normally, the best voice over services work go unnoticed, fitting perfectly into the scene so that viewers almost never realise they are there. When voiceovers get mainstream attention, it is normally for the wrong reasons – but Elisabeth Moss is breaking the trend with her outstanding work.

In truth, it was always going to be difficult for voice overs in The Handmaid’s Tale to go unnoticed. The nature of the story dictates that the thoughts of Offred – the central character, played by Moss – need to be conveyed. They’re not simply a means of guiding users through the story; they’re a medium for many of the key messages it aims to get across.

They probe questions like: how much can you control individual thought? Questions about external actions – down to the control of facial expressions – and inner thoughts, which are central to the original novel.

Without them, the series would never be able to capture the internal horror of its main character. The challenge for Bruce Miller, the production team and – of course – Elisabeth Moss, was how to deliver these voice overs in a way that enhances the story, rather than detract from it. 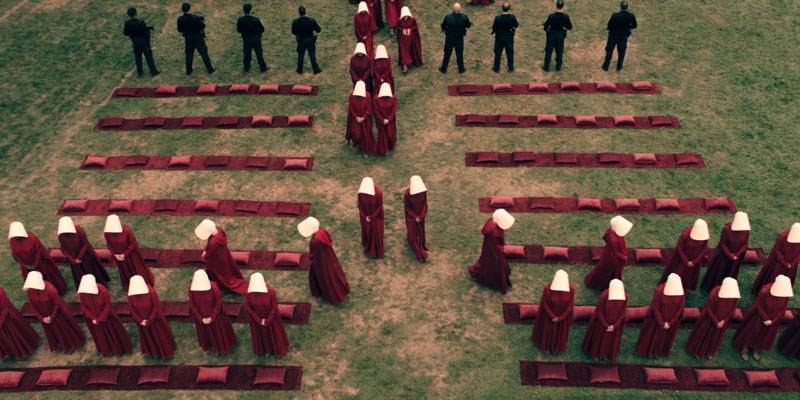 How did they get in right on The Handmaid’s Tale?

The voice over services in The Handmaid’s Tale are a real team effort. Crucially, they are there because they need to be, not as any kind of gimmick or lazy approach to storytelling – which is incredibly important.

Besides that, every element draws towards making a key part of the story, instead of a detached, additional kind of narrative. Moss’ character, Offred, is constantly isolated on the screen with invasive, almost candid camera angles. This restricted view of her world only contributes to the need for inner dialogue, removing all resistance we might otherwise have to it.

Then we have the most crucial element: the delivery of Elisabeth Moss. We’re constantly explaining to our clients the difference between voice over services and voice over artists (acting) but it’s not always easy to find great examples of the latter. However, Moss has been praised for her diverse range as the voice of Offred and her impeccable ability to match her on-screen acting with the voice over work she does before/after.

This is no accident either. Bruce Miller expressed his own surprise by Moss’ knack for visually capturing the emotion of Offred’s thoughts.

“We shot these bits of Lizzie just sitting in a room, quietly going through emotional phases, and when I watched it paired up with the voice over, it worked perfectly,” he told Vulture.

“But none of it was sitting there silently. It was all following the emotional trajectory.”

Moss’ dedication to acting out her scenes while mentally running through her dialogue script – at the same time – is clear to see while watching The Handmaid’s Tale. Without it we wouldn’t be talking about the quality of its voice over services and voice over artists and one of its strongest elements would be missing.

It only goes to show the power of quality voice over services when they’re taken as seriously as they should be.