Home Blog Surprising Valentine’s Day Traditions From Around the World

With Valentine’s Day fast approaching, you may be thinking about romantic strolls, fine dining and roses at twice their normal price. However, in the build-up to 14 February, those aren’t necessarily the first things that come to mind for everyone around the world.

There really is a world of Valentine’s Day rituals out there! In celebration of the most romantic day of the year, we’ve picked our favourite selection of surprising traditions from overseas.

Poems and Easter eggs in Denmark

Denmark puts a creative twist on Valentine’s Day tradition, which starts with poems called Gaekkebrev. These sometimes humorous, often romantic lines are sent anonymously to lucky ladies on Valentine’s Day with a simple clue: the number of dots on the piece of paper tells her how many letters are in the sender’s name. If she can guess who her Romeo is, she gets an Easter egg on Easter Day.

Mass weddings in the Philippines

A new Valentine’s Day tradition has emerged in the Philippines: mass weddings. Hundreds of couples gather in large, open areas to make their vows and say their “I dos” in large numbers. The events are funded by the government and completely free for needy and unwed residents. Good luck spotting yourself in the wedding photos though!

Matchmaking and bonfires in France

Sadly, France’s quirkiest Valentine’s Day ritual – the lottery of love – has been banned for some time now. Singletons once paired up for the romantic day, but any men who weren’t particularly taken with their partner would ditch them and try to find another. At the end of the day, a large bonfire would be lit and jilted women would burn pictures and sometimes possessions of the men who left them behind.

While the emphasis in many countries is on men wooing their ladies for Valentine’s Day, in Japan, the women step up and buy the men in their lives chocolate gifts. But they don’t just buy gifts for their romantic interests – Japanese women will often buy gifts for male friends, co-workers and bosses.

It’s not completely one-sided though, because Japanese women get a day of their own on 14 March, known as White Day. This is the day Japanese men are expected to return the favour and buy gifts for the women who spoilt them the previous month. And, good news girls, an unwritten rule says that men should spend two or three times as much as their female counterparts did!

Estonia throws out the rulebook on Valentine’s Day by celebrating Sõbrapäev or “Friend’s Day” instead. In a bid to include everyone, regardless of their relationship status,
family and friends honour their ties with gifts and get-togethers. Couples are included in the festivities too, of course, with many getting married, engaged or renewing their vows on 14 February.

So, if you’re really stumped on how to come up with an original gesture this Valentine’s Day, why not take your inspiration from overseas? Pick your country carefully though — and don’t hold us accountable if your exotic gestures aren’t received quite as well as they are in their home nation!

Or maybe you’d like to tell your loved one that you love them in another language — here are some translations of the phrase “I love you” below! Happy Valentine’s Day everyone! 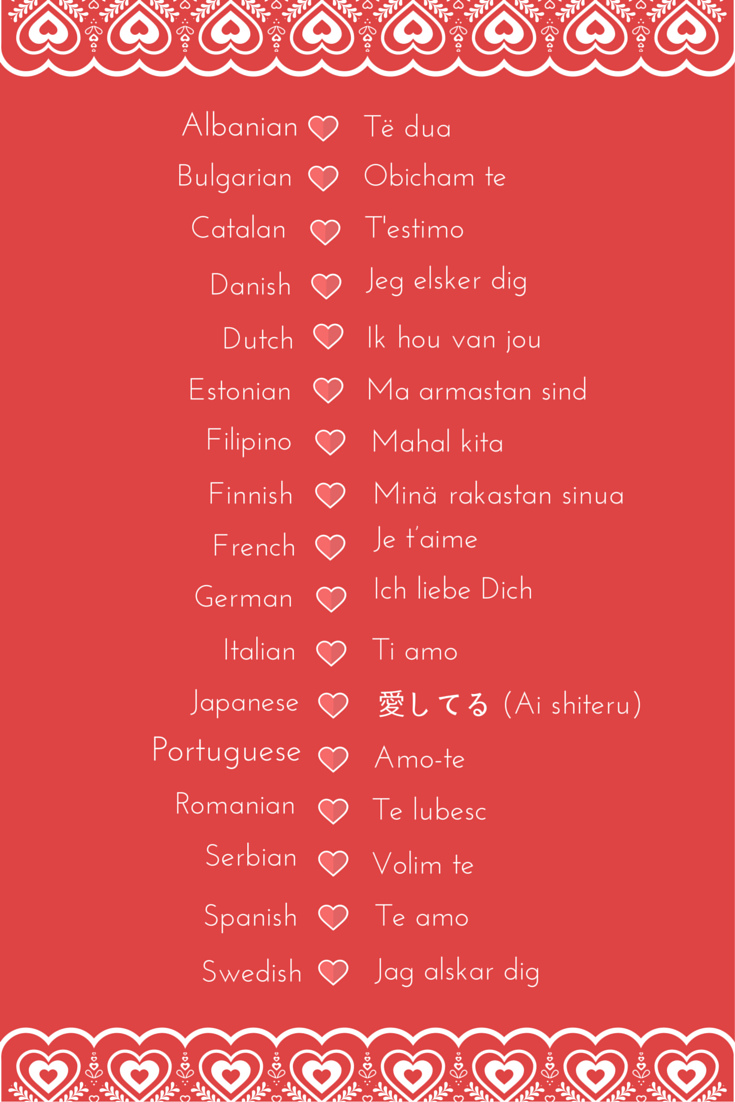