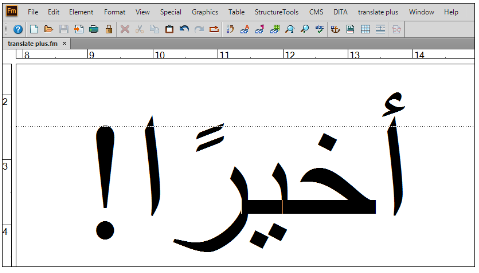 You might have many reasons to remember 2015, good or bad.

But for those involved in technical authoring, or the translation of technical documentation, 2015 was the year when Adobe finally released a version of FrameMaker with a long-awaited (or perhaps that should be “long-overdue”) feature. Less generous users of the software might even have regarded the absence of this feature as a bug, considering how long FrameMaker has been around: it’s some thirty years since its inception.

Until this year it was not possible, in practical terms, to use FrameMaker for what are known as “right-to-left” languages. These are languages such as Arabic, Hebrew and Farsi, where text runs in the opposite direction on the page to the majority of the world’s languages, including English, in which technical documentation – instruction manuals, quick-start guides, help documentation, owners’ handbooks, service manuals – tends to be written or translated.

For organisations translating or authoring content in multiple languages, this limitation tended to result in a two-tier process. Left-to-right languages would be created in FrameMaker, while right-to-left languages would be authored in, or converted to, an alternative format – often InDesign, another Adobe product.

In fact, as InDesign supported a wider range of languages for many years, we were often asked by clients whether it was better to simply move all languages over to a single InDesign workflow. That sounds like a simple solution, but InDesign is really a tool for a different type of document, better suited to brochures and flyers for output to PDF or print: for primarily “single-channel” use.

By contrast, FrameMaker excels at structured authoring: separating content from presentation, and providing easy means for multiple outputs (print layout, XML, Microsoft HTML Help, responsive HTML5, ePub, Kindle) from a single source, and allowing the enforcement of a topic-based structure such as DITA during the authoring process, rather than the free-form approach offered by software such as InDesign or Word.

Converting a FrameMaker .fm file or a whole .book document into an InDesign .indd file means losing many of these benefits, as well as a host of related functionality such as automatic index generation and formatting rules.

Until 2014 there was a FrameMaker FAQ page on Adobe’s website which had a blunt, one-word answer to the question of whether the software supported right-to-left text. But this year, that No has finally vanished, and today Adobe’s main FrameMaker page proudly features a video of someone happily working with right-to-left text. 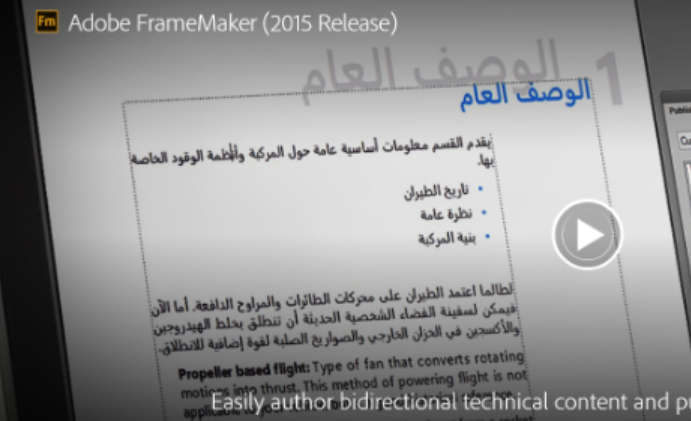 FrameMaker also now supports bidirectional content, where right-to-left and left-to-right text can be mixed within the same paragraph – something which is essential for most technical content in Arabic, Hebrew or Farsi, which will often need to refer to product names from left-to-right languages.

So thanks to Adobe, 2015 was the year when I finally stopped grumbling about right-to-left support in FrameMaker. Which I’m certain has made the world a happier place.