Home Blog Craziest Christmas Traditions From Around the World

Do you ever get the feeling you’ve seen it all before at Christmas? That the same old traditions just don’t excite you anymore? You’ll be glad to know the festive season isn’t quite so predictable everywhere in the world.

In fact, the fine folk at Love Home Swap recently published their top 35 Christmas traditions with a twist from around the globe. It certainly makes for an interesting read, and there are a few select picks we thought deserved a dedicated blog post of their own.

If the kids have been bugging you all year for the chance to see Santa in Lapland, then why not treat them to a festive trip to Austria instead? Rather than the jolly guy in red, naughty kids are paid a visit by his evil sidekick Krampus, who bundles misbehaving little ones into his sack and takes them away, never to be seen again.

At Xmas if you’re naughty in UK you get no gifts. In Austria Krampus steals you away in his sack! This is Krampus!! pic.twitter.com/tU2wor40yr

Slovakia and the loksa pudding toss

You won’t hear many parents in Slovakia telling their kids not to play with their food. In fact, food throwing is somewhat of a tradition in the country and no Christmas would be complete without a traditional loksa pudding toss. The rules are simple: the most senior member of the household takes a healthy spoonful of loksa and hurls it at the ceiling. The more that sticks, the healthier next year’s crop will be! Everybody wins! We expect the not-so-senior household members have to clear up the mess afterwards, of course.

Canada and the true Christmas spirit

Not all Christmas traditions are designed to scare kids or promote food fights! In fact, a bunch of Canada Post volunteers have been keeping the true Christmas spirit alive for 30 years by responding to letters sent to Santa from kids around the world. Send your kids’ Christmas letters to Santa Claus, North Pole, Canada, H0H0H0 and those festive volunteers respond to every letter they can — to kids around the world, in various languages, including Braille.

Roast turkey may not be on the menu if you’re dining in South Africa this Christmas. Instead, the tradition is to gorge on the juices of deep-fried caterpillars from the Emperor Moth family. Turns out Brussel Sprouts aren’t so bad after all! 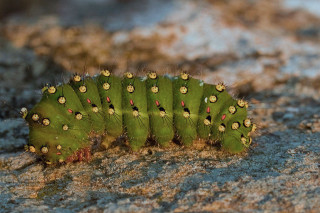 flickr photo shared by dave-pemcoastphotos.com under a Creative Commons ( BY ) license

The fun doesn’t end there in South Africa though, because nothing washes down a tasty meal like a good old-fashioned Christmas story. Instead of Miracle on 34th Street, South African kids get treated to the classic tale of Danny, who mischievously ate the cookies left out by his grandmother for Santa (perhaps he’s not so keen on the deep-fried caterpillars). The bad news is, it turns out his grandmother wasn’t too happy about this. So rather than send the boy to bed without any more caterpillars she brutally murdered the lad and doomed him to an eternity of haunting family homes at Christmas. It’s a children’s classic!

— Season’s Greetings from translate plus! —