Home Blog Why are the big tech companies so obsessed with machine translation?

In case you haven’t noticed, all the tech giants in town are giving it everything they’ve got to break language barriers with machine translation. The likes of Google and Microsoft are investing big in the technology, driving it forward with their latest AI and machine learning breakthroughs.

They’re also doing a very good job of marketing their products, too. Last year, Google told the world its new “AI” translation system is approaching human-level accuracy – and just about every major publisher took the bait.

The question is: why are these tech companies pushing machine translation so hard?

Who are these tech companies obsessing over machine translation?

Google and Microsoft are probably the most widely-known protagonists in machine translation, due to their roles in the consumer market, but they’re not alone. LionBridge, Moravia, Systran and IBM are among the other big names fighting it out for their share in the translation tech industry – and there are new partnerships entering the race every year.

It’s not only US companies going at it either. Chinese tech giant Baidu (which happens to be the country’s number one search engine) is aiming to establish itself as the world leader in artificial intelligence – machine translation and automatic translation included. India is the other big player in the Asia Pacific region while Spain emerged as a contender in 2015 after allocating USD 97.21 million for the development of natural language processing technologies.

Why are the tech giants going nuts for machine translation?

When you consider the biggest names in technology and what they’re capable of doing with the masses of data they now own, machine translation and automatic translation doesn’t seem like the most obvious ventures. Artificial Intelligence and robot engineering make sense; developing new technology for life sciences and space exploration sounds about right.

Well, it turns out there’s some serious money in this industry – and there’s nothing more tech giants love than stacks of cash (or Bitcoin). In 2016, the machine translation and automatic translation market size was valued at more than USD400 million, which doesn’t sound all that earth-shattering.

However, once you factor in the estimated 19% compound annual growth rate (CAGR) between 2017 and 2024, you realise this market is going to almost triple in value over the next seven years. It’s not only market growth that’s at play here, either, but where that market growth is coming from: 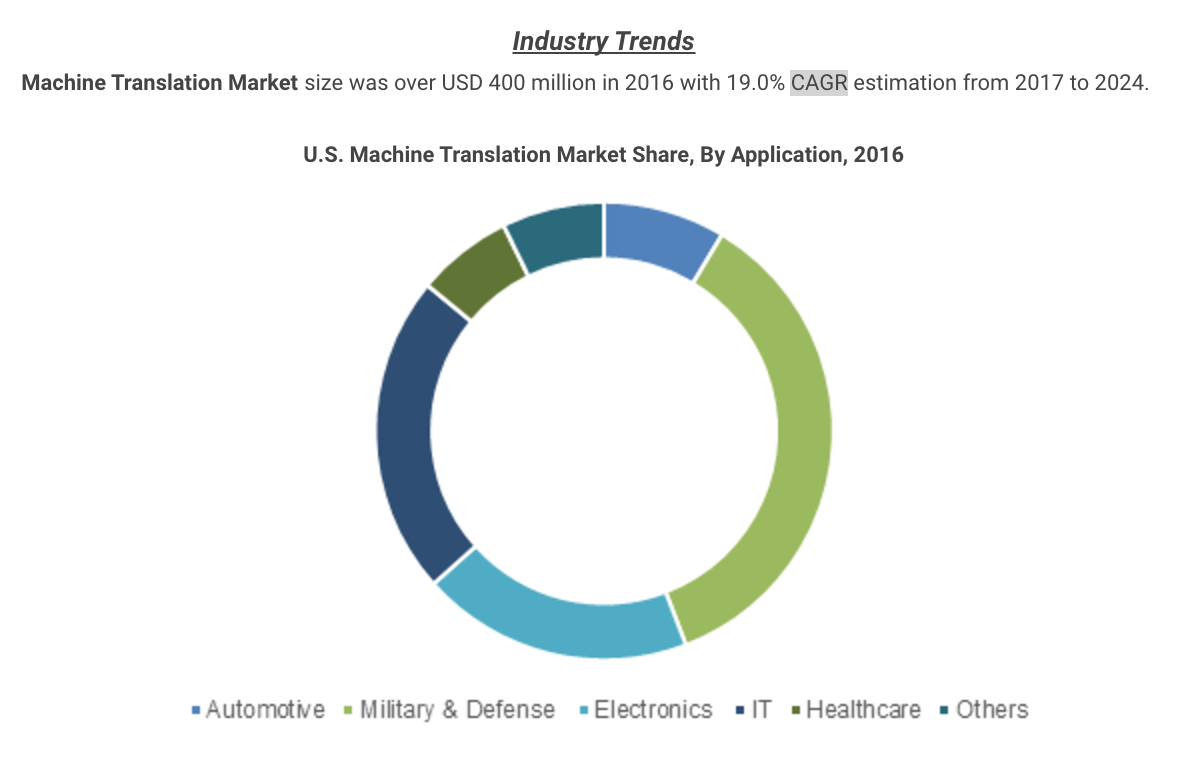 The largest chunk of market share in machine translation isn’t business or travel. It’s military and defence, by quite a large margin. Then you have IT and electronics rounding up the top three players in market share – a highly lucrative trio – and there isn’t much left for other sectors.

Suddenly, the idea that Google or Baidu might actually create machine translators that rival humans (or simply convince world leaders they do) becomes a scary prospect. Let’s hope no major military decisions are made off the back of machine mistranslations. We know Google Translate is pretty useless when it comes to handling Korean, so fingers crossed Dennis Rodman didn’t leave any Google bugs when he paid Kim Jong-un a visit in 2014.

Alexandra KravaritiPosted on: May 24th, 2017
Blog