Rule number one when launching a product overseas: don’t embarrass yourself in front of your single biggest market. Well, that’s precisely what Apple did last week, after people in China, Hong Kong and Taiwan mocked the tech giant over its iPhone 7 slogan.

It turns out that the number 7 is a tricky number in Cantonese, and its slang meaning is already raising laughs at Apple’s expense.

Yes, that’s right. Of all the words to accidently put in the slogan for your most important new product, Apple has certainly chosen a winner. Luckily, there’s nothing too offensive or vulgar about the slang use of “7” in Cantonese – in fact, it’s often used in Chinese politics to mock politicians. Likewise, when someone trips in public or is mocked for their clothing, “You are so seven” is a common jibe.

People in Hong Kong, where Cantonese is the most widely spoken language, are particularly having fun with the latest Apple slogan.

One user took to Facebook to call out Apple over removing the headphone jack from its latest flagship. “Without a 3.5 mm earbud jack, this is exactly penis,” the Hong Konger posted; more than 40,000 people have responded to the post already.

If you think that’s embarrassing, you should hear what they’re saying about the iPhone 7 Plus!

It’s not like Apple didn’t bother trying to adapt its slogans for the Chinese-speaking markets. It adapted the “This is 7” slogan into three separate variations for China, Taiwan and Hong Kong: 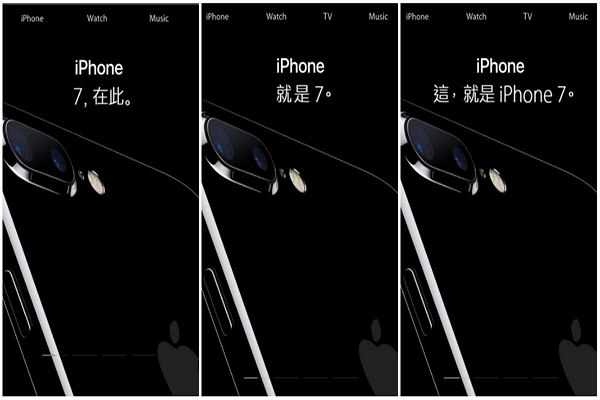 Even then, these localisations come back as pretty awkward translations. Unfortunately, “This is 7” sounds awkward to begin with and it’s obvious Apple has had problems adapting it for Chinese languages. This is made even more complicated by the fact that Mandarin is the most widely spoken language in mainland China and Taiwan, while Cantonese is the main language in Hong Kong, although is still widely spoken in mainland China.

It’s not only a question of language choice, though: the divide between Mandarin and Cantonese is a tense political and historical battle that stirs up deep cultural emotions. Needless to say, translating between the two languages is a difficult task at the best of times.

That said, Apple missing the fact that “7” has a slang meaning in Cantonese is a pretty basic translation error, especially when its closest rival Samsung made the same mistake with its Galaxy Note 7 earlier this year.

We can’t help thinking that Apple should have used transcreation to create an entirely different slogan in this case – one that captures the same punchy energy as “This is 7”, which Apple has completely lost in its translations, but without the innuendo.

Then again, Samsung’s Note 7 went on to be the standout device of 2016 so far (until the batteries started exploding). Meanwhile, the slogan has certainly got people in China, Taiwan and Hong Kong are talking about the upcoming iPhone. So maybe it wasn’t a mistake after all; perhaps Apple knew exactly what it was doing.